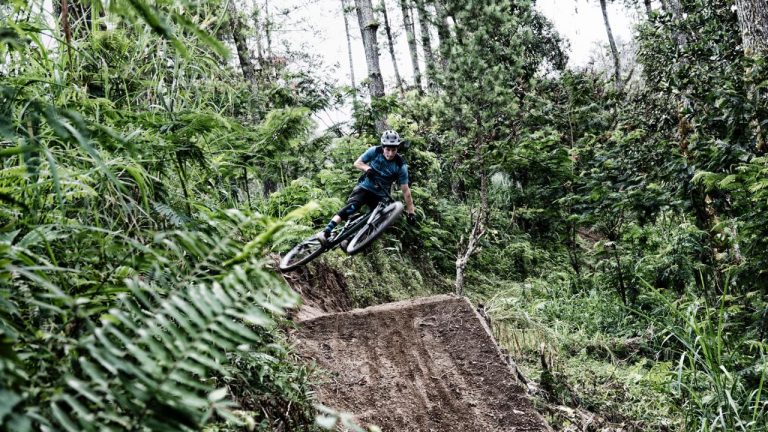 Earlier today I posted a first look at the new Patrol E-Six, but that 150mm travel enduro e-Bike wasn’t all Patrol has launched this year. A few weeks ago I was lucky, really lucky, to visit Bali to soak up the sights and take a few 2020 mountain bikes for a spin. Bali isn’t your usual press launch destination, but we were there because Patrol is an Indonesian brand and what better place to test out some bikes than own home turf. Patrol only produces mountain bikes, but it does so for a range of styles and ages. Kids bikes, dirt jump bikes, hardtails, and full-suspension bikes fill the range, but it was 4 bikes in particular that we were invited to see. 2020 Patrol E-Six This is one very pretty bike.

I’ve gone into more detail for the E-Six over on Singletrack Charged, but here is a quick intro. The E-Six is what Patrol calls an E-Enduro bike, and the extra E is for electric. Patrol has designed its own 150mm travel chassis based around a 630Wh custom battery and Shimano’s E8000 drive system. There are 2 build kits, 4 size options, and 3 colour choices. Of the models available the E-Six S is the most eye-catching with a full XT drivetrain and Fox Kashima suspension. More details here.

Patrol has a bunch of cross country hardtails in its fleet so it makes a lot of sense to combine what they learned with the E-Six with one of their 29 XC bikes. The E-Zero also runs an integrated 630Wh battery and Shimano Steps E8000 motor, but only has 110mm of front wheel travel. E-Zero’s come in standard and S spec with the S indicating it comes with high-end kit including an XT 12-speed drivetrain and Fox suspension.

If you’ve had enough of e-Bikes then feast your eyes on the Patrol 691. The 691 is also all-new for 2020, and it’s the brand’s most aggressive bike available today. Like the E-Six, the 691 has 150mm of rear-wheel travel and 160mm up front from Fox suspension. The 691 S-Spec will feature Sun Ringle wheels, Shimano XT hubs, XT 12 speed drivetrain and a mix of Patrol finishing kit with a smattering of SDG kit. Video: Patrol 691 at Besakih bike park The E-Six is basically the same only with SLX and a lower price point. What’s really interesting is that Patrol builds both bikes with the same frame, Fox Performance 36 fork, and Fox DPX2 rear shock. Another interesting feature of the Patrol 691 is a 157mm Super Boost rear end for added stiffness. What’s impressive though is that although it has a wide hub, heel clearance is still very good.

Need Help? Chat with us